HomeNewsBorder guards have prevented smuggling of more than 4.2 million packs of cigarettes over the past 12 months

Border guards have prevented smuggling of more than 4.2 million packs of cigarettes over the past 12 months

We will soon celebrate the Border Guards Day in Ukraine, and most often, apparently, border guards show their vigilance checking tobacco smugglers. The latter carry millions of losses in packs and hryvnias, but do not give up.

Over the past 12 months, border guards have prevented smuggling of over 4.2 million packs of tobacco.

The State Border Guard Service of Ukraine fights illegal tobacco activities not only at the border, but also inside country and beyond. Operational staff or special units of the department help to expose the places of illegal production of cigarettes, expose and break the schemes of transportation, storage and sale of smuggled and counterfeit tobacco.

Last year, an underground cigarette packing manufactury was liquidated on the territory of Poland during an international operation in which officers of the State Border Guard Service of Ukraine took part. 26 workers from Ukraine were detained.

At the end of this winter, a large-scale operation was conducted against sellers of counterfeit tobacco, including from the temporarily occupied territory. More than 90 searches were carried out simultaneously in the framework of criminal proceedings in the Donetsk, Dnipropetrovsk, Odesa and Volyn regions. More than 750,000 packs of cigarettes estimated at more than UAH 20 million have been found in storage and selling places. And at the end of last year, 270,000 packs of cigarettes, worth 14.5 million hryvnias, were found in the JFO area. According to available data, the goods were produced in occupied Donetsk.

Large-scale illegal tobacco activities were repeatedly exposed at the border crossing points and at the "green border". Let us present you the most significant.

Only this year, "smugglers-diplomats" were caught with tobacco loads three times - in January, February and March. At the border with Hungary, officers of the State Border Guard Service exposed the Honorary Consul of the Baltic country and a tobacco smuggler with a diplomatic passport of the Republic of Guinea-Bissau, and at the border with Poland – a false representative of the UN mission.

Hiding places with 200,000 packs of cigarettes rolled up in technical paper were revealed by border guards of Chernivtsi Detachment at the border crossing point "Porubne". Tobacco “stuffing” estimated at 6 million hryvnas was being transported by truck to Romania. According to Ukrainian counterparts, Romanian border guards found a warehouse with the same rolls on their territory, causing smugglers' losses to increase many times over.

At the end of February this year border guards detained 146 boxes of smuggled cigarettes in the mountains of Bukovyna. An attempt to smuggle in tobacco products estimated at about 2.5 million UAH to Romania was made by the residents of the border village of Krasnoilsk.

At Diakovo BCP border guards of Mukachevo Detachment exposed the idea of ​​a Slovak citizen who was also traveling to Romania. The foreigner hid 125,000 packs of cigarettes in waffle boxes and hiding places of a refrigerator.

A Belarusian truck carrying 130,000 packs of tobacco was heading to Kyiv according to the documents. In Volyn the truck returned to the border with Poland. It was not allowed to enter the EU by border guards. In-depth inspection resulted in 260 boxes of cigarettes estimated at more than 5 million UAH.

Another truck detained in Volyn also carried building materials - foam blocks. However, during the inspection at Domanovo BCP more than 65,000 cigarettes were found estimated at almost UAH 2 million.

It should be noted that the smugglers' losses are usually much higher than the abovementioned estimates. Mostly tobacco smugglers are planning to make a profit in euros, because they try to sell their goods in countries where they are more expensive.

Thus, the border guards VS tobacco smugglers - the battle is ongoing (VS - from the Latin word Versus - against). 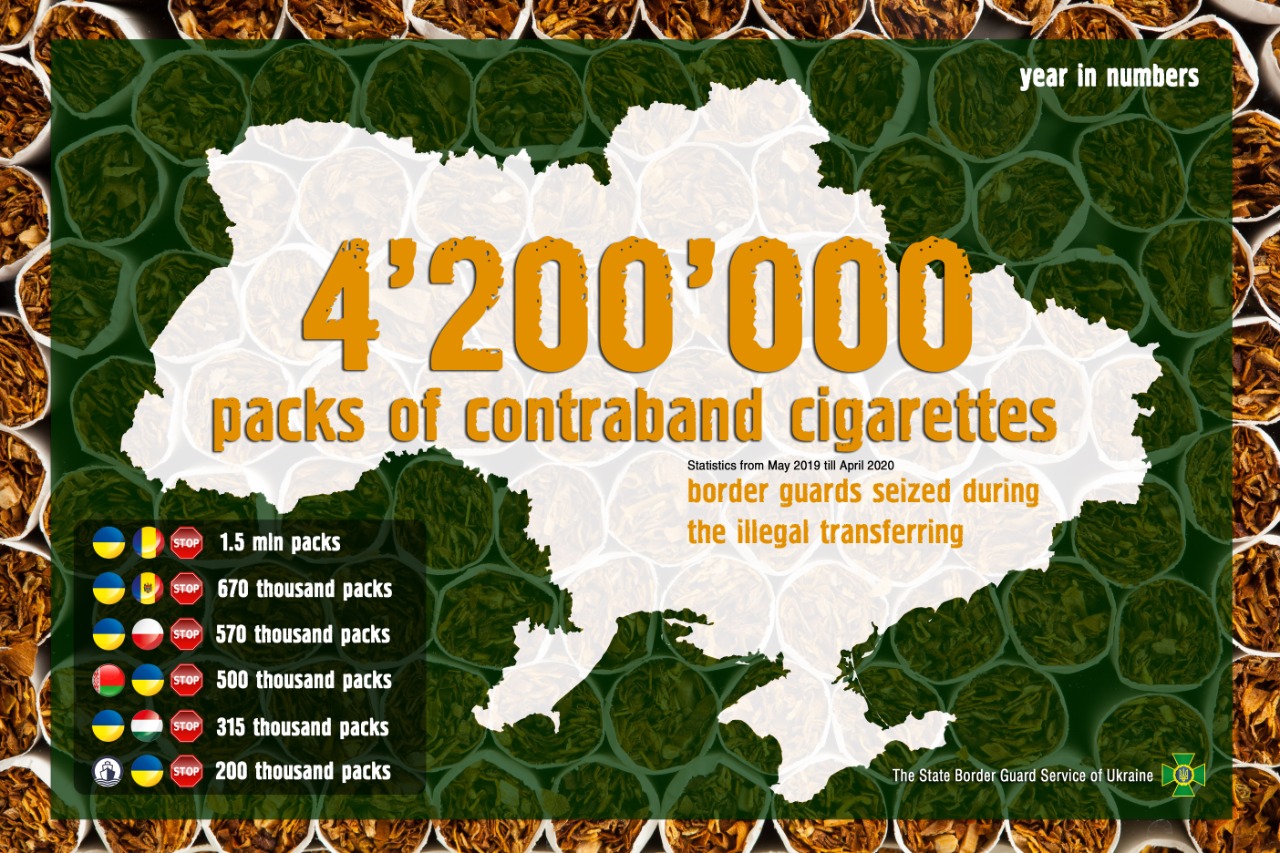